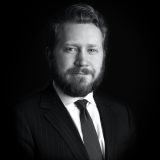 Hunter Morgen is a Senior Advisor at Ballard Partners, having joined the firm after serving more than three years in the Trump Administration as a Special Assistant to President Trump for policy and strategy. Hunter provides firm clients with strategic consulting on trade and immigration policy.

During his tenure in the Trump Administration, Hunter worked in the White House as a principal deputy to Peter Navarro and Stephen Miller, specializing in trade and immigration matters. Among his many responsibilities, Hunter drafted executive orders, legislation, policy guidance and regulations while he over saw a team of five. He also directed the Administration’s efforts on Buy American/Hire American policy.

Prior to his White House position, Hunter was a Policy Advisor at the State Department in the Office of Policy and Planning, where he focused on Africa and assisted the Secretary with preparation for the G-20 Summit.