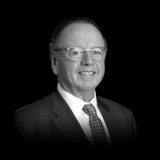 G. John O’Hanlon has more than thirty years of hands-on political, advocacy and business/entrepreneurial experience. He has represented interests before the United States House of Representatives, the United States Senate, the White House and a host of federal agencies and departments.

In 1992, John joined the law firm of McAuliffe, Kelly, Raffaelli, as a partner to begin his legal practice. He then co-founded The Washington Group in 1997. At TWG, John successfully represented a Who’s Who of Fortune 500 Companies, Associations and Causes. He’s well experienced in a broad scope of economic sectors and causes where he developed then implemented winning legislative strategies. John has personally represented clients before the President of the United States, Leaders and Members of Congress, staff and government officials at all levels.

In recognition of his leadership efforts to pass the historic Comprehensive Everglades Restoration Act of 2000, John was a recipient of the Year 2000 Steward of the Everglades Award. John volunteers his time and services to a group of retired military officers whose mission is to increase the diverse enrollment at U.S. Military Academies so that military leadership is more reflective of those enlisted. John has also worked with Civil Rights leaders and activists to increase voter registration and GOTV.

John is an honor graduate of Northeastern University with a Bachelor of Science in Human Resource Management and earned his Juris Doctorem at Georgetown University Law Center. He is admitted as an Attorney and Counsellor of the Supreme Court of the United States.