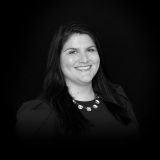 Courtney has spent her career implementing new government programs, managing emergent priorities, and providing guidance and policy direction to executives at the highest levels of government.

Courtney previously served as the Chief of Staff at the Department of Health. In her role she directed day-to-day operations and planning for the department and county health departments statewide, and directly supervised the Offices of Communications, Legislative Planning, and Executive Appointments. Courtney also led the department’s actions as part of Florida’s Unified Command Executive Team in response to COVID-19.

Prior to her appointment as Chief of Staff, Courtney served as the Director of Florida’s medical marijuana program. Courtney joined the Office of Medical Marijuana Use in its infancy and quickly rose through the ranks taking the helm as director in 2018. During her tenure, the Office licensed Florida’s first regulated marijuana companies, registered more than half a million patients and enrolled thousands of certifying physicians quickly transforming Florida into one of the largest marijuana markets in the country.

Courtney began her career in state government at the Executive Office of the Governor under Governor Rick Scott in the Office of Fiscal Accountability and Regulatory Reform where she served as the policy analyst and was responsible for reviewing executive agency regulations to determine whether they adversely impacted job creation, imposed burdensome regulations or costs on businesses, or unreasonably restricted the ability of individual citizens to find employment.

Originally from Destin, Courtney earned a Bachelor of Science in Political Science, and Master of Science in Applied American Politics and Policy from Florida State University. She also serves on the Florida Gubernatorial Fellows Alumni Board and remains involved in recruitment and mentoring for the program.