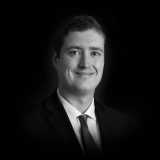 Previously, Alex served as Special Assistant to the President for the Defense Industrial Base at the White House National Economic Council (NEC), where he was the principal Executive Office of the President official responsible for matters impacting the health and resiliency of the defense and manufacturing industrial base. He had also served as Director for Indo-Pacific Security & Oceania at the NSC, with a portfolio covering U.S. relations with Australia, New Zealand, the Pacific Islands, and regional security issues.

Alex earlier served on the Presidential Transition Team at the U.S. Department of State and as Senior Advisor to former U.S. Rep. J. Randy Forbes (R-VA), Chairman of the Seapower & Projection Forces Subcommittee of the House Armed Services Committee.

Alex has written widely on national security and defense issues in publications including The Wall Street Journal, Foreign Policy Magazine, Newsweek, The Hill, National Review, Real Clear Defense, The National Interest, and the Naval War College Review. He currently serves on the Board of Visitors of the U.S. Coast Guard Academy and is a Term Member of the Council on Foreign Relations. His awards include the Secretary of Defense Medal for Outstanding Public Service and the NSC’s Outstanding Service Award. Alex is a graduate of George Washington University.