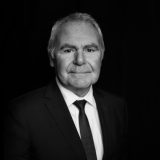 As Senior Partner of Ballard Partners’ Washington, DC office, Syl works closely with the firm’s President, Brian Ballard, and members of the Washington, DC team regarding a variety of significant federal issues on behalf of both domestic and foreign clients. Most important among them are matters involving Medicare, Medicaid, refugee assistance, education, trade, tariffs and tax issues before the Legislative and Executive branches of the federal government.

During his forty plus years tenure in Washington as a lawyer and government relations consultant, Syl has represented clients before numerous federal departments including the U.S. Departments of Health and Human Services, Education, Justice, State, Transportation, Commerce, Treasury, Interior, Homeland Security and the U.S. Trade Representative’s Office.

Syl has been a member of the District of Columbia Bar for more than forty years and had the high honor of serving his country as a member of the United States Air Force. Further, his public service career included serving as an Attorney with the Office of the General Counsel at the U.S. Department of Health and Human Services, as a Special Assistant U.S. Attorney in the District of Columbia and as an Assistant Director of the Cuban Haitian Task Force at the U.S. Department of State during the mass immigration crisis commonly known as the Mariel Boat Lift.