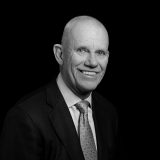 Bob joined Ballard Partners on January 1, 2019, following his retirement as President of the Florida Transportation Builders’ Association. He spent thirty years leading the state’s premier transportation construction industry association and is known throughout Florida and in Washington for his expertise and tenacious advocacy at both the state and federal level. Under Bob’s leadership FTBA achieved countless legislative victories over the last three decades, from securing the largest funding increase for transportation in Florida history to protecting the state’s transportation trust fund.

Bob was recognized with numerous transportation industry awards throughout his tenure at FTBA, most notably being named to the American Road and Transportation Builders Association’s (ARTBA) Hall of Fame.  He was also honored with the Nello Teer award by ARTBA for his outstanding contributions to the industry. In 2008, he received the Center for Urban Transportation Research (CUTR) Transportation Achievement award.

A native of Tennessee, Bob grew up in the construction industry.  Prior to joining FTBA, Bob was an executive with a major southeastern highway and heavy construction firm until its sale in the late 1980’s. He participated in the construction of many major projects throughout the Southeast.  Bob is a graduate of Virginia Tech with a degree in Building Construction. He resides in Tallahassee with his wife, Beverly, and enjoys spending time with their three sons and six grandchildren.